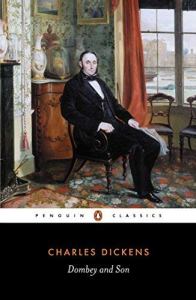 Dealings with the Firm of Dombey and Son: Wholesale, Retail and for Exportation (I think we can see why the title is usually shortened) was originally published in monthly parts between 1846 and 1848. It’s the book I was supposed to read for a Classics Club Spin over a year ago, but I struggled to get into it at the time and decided to wait until I was more in the mood for Dickens. And you definitely need to be in the right mood for a book of this length – more than 900 pages in the edition I read! I’ve loved other very long Dickens novels, though, such as the wonderful Our Mutual Friend, so I hoped I would end up loving this one too. Unfortunately I didn’t, but I did still find a lot to enjoy.

The Dombey of the title is the wealthy owner of a shipping company who dreams of having a son and heir who will be able to continue the family business. Dombey gets his wish early in the novel when his wife gives birth to a son, Paul. However, she dies shortly after the birth, leaving Paul to become the sole focus of his father’s attention – even though Dombey already has a six-year-old daughter, Florence. Florence loves her father and does her best to please him, but no matter how hard she tries, it’s obvious that all of Dombey’s hopes and ambitions lie with Paul and that Florence is just a useless girl and an inconvenience.

Whether or not the proud and arrogant Dombey will ever come to love and value his daughter as she deserves is the question at the heart of the novel, but as you would expect from Dickens, there are also plenty of diversions and subplots and lots of larger than life characters to get to know. Of these, my favourites were Captain Cuttle, the kind-hearted retired sea captain with a hook for a hand, and Susan Nipper, Florence’s loyal nurse and one of the few people who will stand up to Dombey for his neglect of his daughter. There’s a great villain too: James Carker, the scheming manager of Dombey and Son, with gleaming white teeth and a devious brain. There are too many others I could have done without, though – mainly the ones who seem to be there purely for their comedy value, such as Major Bagstock, Sir Barnet Skettles and Cousin Feenix, without actually adding much to the central plot.

Dickens gets a lot of criticism for his treatment of female characters (I think Dora in David Copperfield is his worst), but the women in this book are well-drawn and interesting. Yes, Florence can be too good to be true at times, but her father’s rejection of her is so cruel and hurtful that it’s impossible not to have sympathy for her. Her stepmother, Edith Dombey, though, is one of the strongest female characters I’ve come across in a Dickens novel: a woman filled with self-loathing after being pushed into marriage by her mother, who then decides to take her fate into her own hands.

Although I really enjoyed parts of this book, other sections dragged and I’m afraid I can’t list it amongst my favourite novels by Dickens. Nicholas Nickleby is the next one I’m planning to read, so I’m hoping for better luck with that one.

This is book 17/50 read from my second Classics Club list.

23 thoughts on “Dombey and Son by Charles Dickens”