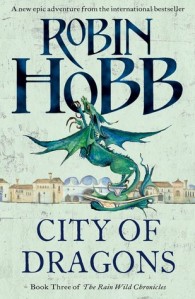 This third novel in Robin Hobb’s Rain Wild Chronicles is my favourite of the series so far – although it doesn’t really have a lot of competition, as I was disappointed with the previous two books. If you’re new to Robin Hobb, don’t start with the Rain Wild quartet; they are part of a larger sequence and not only are they not as good as the earlier books, they also fall towards the end of the sequence. You need to begin with the Farseer Trilogy, the Liveship Traders Trilogy and the Tawny Man Trilogy, all of which are excellent!

Anyway, getting back to City of Dragons, it continues the story where the previous novel, Dragon Haven, left off: with our band of stunted, poorly formed dragons and their human keepers within reach of the fabled Elderling city of Kelsingra at last. Separated from the city by the swollen, fast-flowing waters of the Rain Wild River, the group need to make their way across – but only one of the dragons, Heeby, has successfully learned to fly. The magical properties of Kelsingra could restore the dragons to their former glory, but first they need to find a way to get there…

I think the fact that I enjoyed this book more than the first two in the series is mainly due to the wonderful, atmospheric descriptions of Kelsingra. Although most of the dragons and keepers are stranded on the opposite banks of the river, a few of the characters do manage to make trips back and forth to explore the abandoned city. Different characters hope for different things from Kelsingra. Historian Alise Finbok tries to leave the buildings and treasures untouched, determined to make a careful record of everything she finds before word of the discovery begins to spread and traders and scavengers from Bingtown descend upon the city. Rapskal and Thymara, however, part Elderling now themselves, know that Kelsingra is not quite the dead, empty place it may at first appear, and they are able to connect with the memories it holds in a way that Alise cannot:

“Some of the streets she [Thymara] ran through were dark and deserted. But then she would turn a corner and suddenly be confronted by torchlight and merrymakers, a city in the midst of some sort of holiday. She had shrieked the first time, and then she recognized them for what they were. Ghosts and phantoms, Elderling memories stored in the stone of the buildings she passed.”

Although the Kelsingra sections of the book interested me most, the action moves away from the city now and then so that we can catch up with some of the other characters and subplots from earlier in the series: Alise’s estranged husband, Hest, waiting in vain for Sedric to return to Bingtown with dragon parts to cure the invalid Duke of Chalced; Leftrin, captain of the liveship Tarman, who is heading back to Cassarick to claim the keepers’ payment for the expedition; and Malta and Reyn Khuprus, expecting the birth of their first child at any moment. There’s a lot going on in this novel and the way the various storylines begin to converge towards the end sets things up nicely for the fourth and final book, Blood of Dragons, which I hope to read soon.

10 thoughts on “City of Dragons by Robin Hobb”