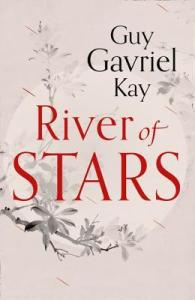 River of Stars is a sequel to an earlier novel by Guy Gavriel Kay, Under Heaven, but being set several centuries apart, the two books stand alone and it’s not essential to read them in order. However, the world Kay creates in this novel has been shaped by the events of the previous one, so that’s something worth bearing in mind.

The world to which I’m referring is a thinly disguised version of China during the time of the Song Dynasty – or Twelfth Dynasty, as it is called in the novel. Since the fall of the glorious Ninth Dynasty, described in Under Heaven, Kitai (the name given to China) has been in decline; their Fourteen Prefectures have been lost to barbarians from the northern steppes, and their once mighty empire is no more. With the army greatly weakened, military decisions are now made by government ministers while bad news is hidden from the emperor who immerses himself in poetry, calligraphy and the creation of a magnificent garden.

As the story of this fallen empire unfolds, we are introduced to a large number of characters. Two of the most prominent are Ren Daiyan, who believes his purpose in life is to reclaim the lost Fourteen Prefectures and restore Kitai to its former glory, and Lin Shan, a woman who writes poetry and thinks for herself, at a time when women are not expected to do either of those things. The paths of Ren Daiyan and Lin Shan cross now and then and their actions carry the story towards its conclusion, but along the way we meet an assortment of emperors and barbarians, prime ministers and war-leaders, diplomats and poets, some of whom have a big part to play in the story and some a small one, but all are significant in one way or another.

Although Kay’s novels are usually described as historical fantasy, most of them have very few traditional elements of fantasy – in this particular book I only noticed two or three, including an encounter with a fox-woman and a few mentions of ghosts. His books are much closer to historical fiction, which is probably one of the reasons why I enjoy them so much (along with the beautiful, lyrical writing). Before starting this one, I knew nothing at all about the Song Dynasty, so despite Kay’s renaming of people and places, it’s good to know that I now have at least a small amount of knowledge of the period, of the Disaster of Jingkang and the Jin-Song Wars.

River of Stars is a fascinating novel and one that requires some patience; it’s not a book that you can rush through, as every character, every conversation, every decision could be important later on. In case we might be in danger of forgetting this, Kay gives us frequent reminders:

It was possible for people to enter your life, play a role, and then be gone. Although if you could sit on a horse in a wood under dripping leaves years after and think about them, about things they’d said, were they really lost?

He ought to feel sympathy. He didn’t. You said certain things, damaged someone’s life, and your own fate might take a different course because of it.

However, although this is an impressive novel and I did enjoy it, I think his two books set in China are my least favourites so far. The characters in them just didn’t seem to come to life for me the way they did in books like Tigana and The Lions of Al-Rassan and I think the constant foreshadowing and discussions of fate and consequences made me too aware of the structure of the novel rather than allowing me to become completely immersed in the story. At least I still have plenty of Kay’s earlier books left to look forward to: The Fionavar Tapestry trilogy, Ysabel, The Sarantine Mosaic duology and A Song for Arbonne.

10 thoughts on “River of Stars by Guy Gavriel Kay”