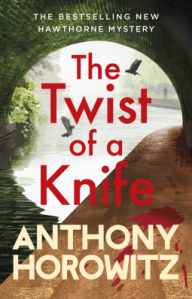 This series, of which The Twist of a Knife is the fourth book, takes as its premise the idea that the author Anthony Horowitz himself is one of the main characters, enlisted by the fictional detective Daniel Hawthorne to write books about the cases he investigates. It’s a concept that some people love and others hate, but if you have followed this series through to its fourth outing you probably, like me, fall into the first category. If you’re yet to read any of these books, you could start with this one if you want to as it does stand alone, but I would recommend beginning with the first, The Word is Murder, if you can. Either way, try one and see what you think!

The Twist of a Knife begins with Hawthorne trying to persuade Horowitz to write another book about him, but Anthony has other plans. He had only agreed to a three-book deal and that is now complete; now he’s working on a different novel – Moonflower Murders – and preparing for the London opening of his play, Mindgame. However, as Anthony himself then admits, the fact that we, the reader, are holding a fourth Hawthorne novel in our hands proves that somehow Hawthorne must get what he wants!

The story then moves on to the first night of Mindgame at London’s Vaudeville Theatre. The play has been very well received on tour and Horowitz is hoping that London audiences will like it just as much. Everything goes smoothly on that first night, but as Anthony and the cast get together in the green room after the play, the first review comes in – and it’s a bad one. In fact, it couldn’t be much worse. Written by the critic Harriet Throsby for the Sunday Times, the review is rude, scathing and insulting, placing most of the blame on Horowitz’s writing. When Harriet is found stabbed to death the next morning, suspicion immediately falls on Horowitz and he is arrested for murder. His only hope is that Hawthorne can find the real culprit and clear his name – but what will Hawthorne expect in return?

I think this could be my favourite of the four books in this series. I loved the theatrical setting and I found the mystery a particularly interesting one. Just about everyone involved with the play Mindgame has both the motive and the opportunity to have killed Harriet and I enjoyed learning more about each of the suspects – I did pick up on some of the clues, but certainly not all of them and I didn’t guess who the murderer was until the truth was revealed in an Agatha Christie-style denouement at the end of the book. Mindgame is a real play written by Horowitz which was first performed in 1999, although in this book it’s presented as a new work and the actors, director and events of the opening night are fictional. It sounds like a fascinating play and I’m tempted to read it, although it sounds like one that would have to be seen on stage to fully appreciate.

Daniel Hawthorne remains a private, secretive person, as he has from the beginning of the series, but with each book a few more facts about him are uncovered. In this book, Horowitz has the chance to spend some time in Hawthorne’s home and makes one or two intriguing discoveries which I’m sure will be explored further in the next book. I’m assuming there will be a next book – in fact, there were hints at the end of this one that we could have several more to look forward to. I hope so, although I would still prefer another book about Susan Ryeland and Atticus Pünd to follow Magpie Murders and Moonflower Murders!

Thanks to Century for providing a copy of this book for review via NetGalley. 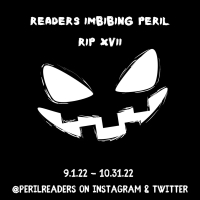 13 thoughts on “The Twist of a Knife by Anthony Horowitz”