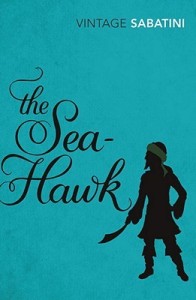 I love Rafael Sabatini! I can always count on him when I’m in the mood for a good old-fashioned adventure story (which is often) and The Sea-Hawk has it all: treachery, betrayal, revenge, duels, kidnapping and piracy on the high seas. It’s a similar story in some ways to his later pirate novel, Captain Blood, but I think I enjoyed this one slightly more.

Published in 1915, The Sea-Hawk is set in the sixteenth century during the reign of Elizabeth I. Our hero is Sir Oliver Tressilian, a gentleman and former sailor from Cornwall who has worked hard to restore his family’s reputation which had been tarnished by the behaviour of his late father. Sir Oliver is betrothed to the beautiful Rosamund Godolphin who returns his love despite the fact that her brother Peter hates the Tressilians due to a family feud. When Peter is killed in a duel the blame falls on Oliver – and while the reader knows that Oliver is innocent, Rosamund does not. Things quickly go from bad to worse for Oliver and he finds himself sold into slavery and sent to the Barbary Coast at the oars of a Spanish galley.

At home in England Rosamund continues to believe Oliver to be the murderer of her brother, while the real culprit stays quiet and benefits from Oliver’s absence by claiming his estates, as well as the woman he loves. Several months later, in Algiers, we meet a Muslim corsair known as Sakr-el-Bahr, or ‘hawk of the sea’. Sakr-el-Bahr’s pirating skills have won the admiration of Asad-ed-Din, the Basha of Algiers, who claims to love him as a son – but this has made him a target of the Basha’s Sicilian wife, the scheming Fenzileh, and her jealous son Marzak. I don’t think it’s too much of a spoiler to tell you that Sakr-el-Bahr is, of course, Sir Oliver, who is preparing to return to Cornwall to take his revenge…

Having read three of Sabatini’s other novels, I’ve come to know what to expect from him – and The Sea-Hawk definitely lived up to my expectations. I’m finding that his books all follow a similar pattern (at least, the ones I’ve read do) in which the hero suffers a betrayal or injustice of some kind, undergoes a transformation and plots his revenge/attempts to clear his name, while being completely misunderstood and misjudged by his love interest. Sir Oliver is a great character; he’s not always easy to like, but considering everything he is forced to endure, it would be difficult not to want things to work out for him in the end. Rosamund is a frustrating heroine, though, being so quick to think the worst of Oliver – but to be fair, she doesn’t share the reader’s knowledge that he is innocent.

The setting is great too. I particularly loved the chapters set in Algiers, in which Sabatini immerses us in the culture, religion and history of the Barbary coast, with some vivid descriptions of the labyrinths of narrow streets, souks and slave markets, and the courtyards, archways and orchards of the Basha’s palace. The focus on the Barbary corsairs rather than the pirates of the Caribbean gives the book a different feel and a different atmosphere from Captain Blood – and I was pleased to find that there was plenty of land-based action as well as ship-based (as I’m sure I’ve mentioned before, I’m not usually a big fan of books set at sea).

As I’ve now read the four novels which are probably Sabatini’s most popular – Scaramouche, Captain Blood, The Sea-Hawk and Bellarion – I would appreciate any recommendations as to which of his books to read next.

10 thoughts on “The Sea-Hawk by Rafael Sabatini”