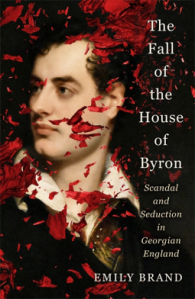 The poet Lord Byron was famously described by Lady Caroline Lamb as ‘mad, bad and dangerous to know’. This recent biography by Emily Brand shows that he is not the only member of his family to whom this description could apply! Subtitled Scandal and Seduction in Georgian England, the book takes the Byron ancestral home, Newstead Abbey in Nottinghamshire, as its starting point and shows how this once grand house falls into ruin over the years, mirroring the downfall of the Byron family.

George Gordon Byron, 6th Baron Byron, the Romantic poet, is obviously the best known Byron; a lot has already been written about his life and work, so he is not really the focus of this book. He does appear from time to time, but the majority of the book is devoted to the stories of his parents and grandparents, great-aunts, great-uncles and their children. As was common in that era, the same names tended to be passed down from father to son and mother to daughter, so there are lots of Johns, Williams and Georges, Isabellas, Elizabeths and Sophias. The family tree at the beginning of the book is useful, but it’s still easy to get confused! However, some of the family members are given more attention than others and these include:

* William Byron, 5th Baron Byron – Known as ‘the Wicked Lord’, William Byron is rumoured to have tried to abduct an actress at the same time as negotiating his marriage to an heiress. He is also tried for murder after killing a friend in a duel. In later life (after his son elopes with his own cousin), William finds himself in financial difficulties, selling off parts of the family estates and unable to keep Newstead Abbey in good repair.

* Vice Admiral John Byron – Nicknamed ‘Foul-Weather Jack’, John Byron is a Royal Navy officer and explorer. The book describes his adventures at sea, including a shipwreck off the coast of Chile, his role in claiming the Falkland Islands for Britain, and the battles he fought in during the American Revolution. Towards the end of a career which had once seemed so impressive, John returns home under the shadow of failure and suffering from ill health.

* Isabella Howard, Countess of Carlisle – William and John’s sister marries the Earl of Carlisle and lives with him at his estate of Castle Howard in Yorkshire until she is widowed in 1758. Her second marriage, to a much younger man, makes her the subject of gossip, and after separating from him several years later, she travels Europe in the company of a German soldier, writing poetry, throwing parties and falling into debt.

* Captain John Byron – Later known as ‘Mad Jack Byron’, he is Foul-Weather Jack’s son and George Gordon’s father. In 1785, he marries a Scottish heiress, Catherine Gordon, for her money and proceeds to waste her fortune on ‘gambling, pretty women, thoughtless spending on clothes, alcohol and horses’.

Although all of these people were individually fascinating to read about (I was most interested in Isabella, an independent and unconventional woman who is often unfairly judged by the standards of the time), I found the structure of the book quite disjointed and difficult to follow at times. In the first half of the book, each of the main characters has a chapter devoted mainly to them, but by the second half their stories overlap so much that I was struggling to keep them all straight in my mind. Having said that, I’m not sure how else the book could have been structured as the actions of one family member obviously have an impact on the lives of all of the others and it would have probably been impossible to continue writing about each of them separately.

As well as exploring the downfall of the Byron family, the book also offers lots of interesting insights into Georgian life; I particularly enjoyed the descriptions of the fashionable society of Bath and the friendship between Sophia Byron (Mad Jack’s mother) and the authors Fanny Burney and Hester Thrale. Emily Brand has obviously carried out a huge amount of research for this book; I can’t comment on the accuracy as I’ve never read any other non-fiction about the Byrons, but she does quote from a large number of primary sources and everything is clearly referenced at the end of the book. Although at times I found it all slightly overwhelming and felt that I was being given so much information I couldn’t digest it all properly, I still very much enjoyed reading this book and getting to know the members of this scandalous family!