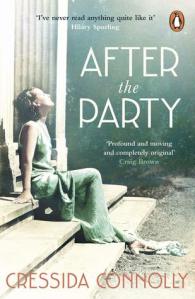 When I saw the list of titles shortlisted for this year’s Walter Scott Prize for Historical Fiction, After the Party was not one that particularly appealed to me but I have set myself a challenge of reading all of the shortlisted books since the prize began in 2010, so as my library conveniently had a copy available I brought it home and gave it a try.

The story is divided between two time periods. In 1938 we meet Phyllis Forrester, who has just returned to England with her husband and children after a long absence abroad. The narrative takes us through the events of that year and the wartime years which follow. There are also some sections set in 1979 with Phyllis looking back on that earlier time and on the choices and mistakes which led to her imprisonment. Yes, we know from the beginning that she has been to prison – but we don’t know exactly how or why that happened because the reasons are deliberately kept quite vague throughout most of the novel.

The 1930s storyline follows Phyllis as, back in England for the first time in three years, she occupies herself by helping her sister, Nina, to run a summer camp for young people. The camp is part of a new political movement which Nina and her husband are very enthusiastic about and they are hoping that the charismatic man they call ‘The Leader’ will visit at some point that summer. Unless I wasn’t paying attention, the name of this political group and its leader are rarely, if ever, mentioned in the book – certainly not until near the end, anyway – but with a little bit of knowledge of the period it’s easy enough to guess who they are.

If you believe that Phyllis is being honest with the reader, it seems that she has little idea of the true nature of the group or the values it represents. There’s a sense that her involvement has happened mainly because she has been at a loose end and looking for something useful to do to fill her days, and because she likes the idea of ‘belonging’ somewhere. For a while it all seems quite innocent; the main aims of the organisation appear to be to promote peace and avoid another war and it’s quite understandable that many people at the time would have supported those aims, with the horrors of the recent Great War fresh in their minds. Gradually, though, we start to see some uglier ideas being expressed and we can only assume that Phyllis must be aware of these views and agrees with them or at least can see nothing wrong with them. I thought it was quite an effective way of showing how people can become slowly indoctrinated into dangerous ways of thinking, something which is still as relevant today as it was in 1938.

I’m not sure how much sympathy we were intended to have for Phyllis but, although the circumstances of her arrest and the descriptions of her time imprisoned in Holloway are certainly horrible, I struggled to warm to her at any point, and I didn’t like any of the other people in her family and social circle either. They were the sort of people that, if I knew them in real life, I wouldn’t really want anything to do with; people who move in a world of snobbery and gossip, thinking they are better than everyone else. That was maybe the point – that the superiority and sense of status that these characters feel is partly why they are so open to the views of The Leader – but I didn’t particularly enjoy reading about them and their lives. I also felt that the incident at the party which is made to sound so dramatic in the novel’s blurb – the incident where Phyllis ‘lets down her guard for a single moment, with devastating consequences’ – was not as significant as it sounded and after reading so many pages waiting for that moment to come, it was an anti-climax when it did.

For the reasons above, this is not my favourite of the books I’ve read so far from this year’s Walter Scott Prize shortlist but I can see why it has been nominated as it’s a much more interesting and layered novel than I had initially thought it would be and one that left me with a lot to think about after reaching the end.

24 thoughts on “After the Party by Cressida Connolly”